Five Malbec FactS You Need To Know For Better Drinking

You’ve already heard about Argentine Malbec: it’s a fruit forward and soft red wine, with full body and an easygoing soul. There’s reason enough to drink it if you get along very well with Shiraz in the same style. But, what you might not know are the Malbec trends on terroir, new flavours and fresher styles that are emerging in Argentina. If you want to really understand the complexity of this wine and find new emotion for your palate, Argentine Malbec will satisfy your thirst for both wine and knowledge.

Malbec terroir approach.
Argentina has around 40 thousand hectares of Malbec stretching from the Tropic of Capricorn on the northern border alongside Bolivia to the southern oasis of Capitán Sarmiento, Chubut in the heart of Patagonia. The huge spread of climates and terroir creates a broad range of flavours for this most Argentine of reds. In The Andes Valleys of Salta up to 3100 metres above sea level, Malbec reveals a unique spicy and roasted capsicum flavour, with full body and rounded tannins. In contrast, at the bottom of Mendoza’s hill and in Patagonia steppe where you’ll find cooler regions like Winkler I and II zones and long summer days, Malbec reveals a fruity, floral taste, tight palate and great freshness. In the middle, there is a wide range of flavours, at the centre of which is Luján de Cuyo’s terroir in Mendoza province. Everything you have come to know about Malbec flavour is based on the ones from Luján: well ripened fruits, sweet spice, soft tannins and good muscle.

There is no such a thing as a single Malbec flavour.
Whilst Argentina is looking to define new styles of Malbec, some universities and investigation centres like INTA, Catena Institute of Wine and Doña Paula Terroir laboratory are focusing on specific Malbec aromas and flavours. Until now, there has been no evidence or single molecule to define the unique character of Malbec - on the contrary, Malbec aroma and taste is so permeable to terroir changes, this will be used as a key to define and characterise them.

Reserva or sparkling?
A little known fact about Malbec is its capacity to age well. Indeed, a group of labels that evolved in the 70’s is still available at
wine stores today. If you’re looking to buy Malbec now for long term cellaring, mild or cool climate ones like Valle de Uco are your best option. Argentinian wine laws require Reserva to be oak barrel aged for at least one year and Gran Reserva at least two years, making both styles a great choice.

Another rarely known Malbec fact is how well it lends itself to sparkling.
There is a small but bold group of Malbec sparkling brands in both white and rosé, which are similar to light reds in taste, and exhibit freshness and body typical of sparkling wine. In the sparkling wine family, which Malbec plays the same role as Pinot Noir in champagne, and shares the spotlight with Chardonnay.

New wine, new food.
One of the most interesting new Malbec trends is food pairing. Fresh wines with open, expressive aromas and light mouth feel can be paired with a wide range of dishes. It’s no longer all about the monolithic world of Asado (barbeque) and Malbec, now there are new options to explore, especially in home cooking. Because of its friendly, easy-going soul Malbec pairs perfectly with light tomato sauce, pasta with olive oil and herbs and even some firm fishes like albacore or tuna - and of course, it still goes very well with grilled or stewed meat, prosciutto, salami and cheeses like Gouda or Emmental, so there’s no excuse not to serve it at home!

Artisan Malbec: Why do you think Argentina adopted the Malbec?

Fabricio Portelli: When Argentina reached out to go and discover the rest of the world we realised that we had so much Malbec in our terroir that we weren’t exploiting. This is when international consultants accidentally realised that instead of competing against wines like Cabernet Sauvignon and Chardonnay it would be best to compete with a unique and new wine like Malbec. This is where its potential was and this is exactly how it happened.

Artisan Malbec: Malbec is now celebrated around the world – which country do you think is going to surprise us next?

Fabricio Portelli: Chile, without doubt. Every year there is an increasing amount of Malbec wine and it offers its own uniqueness because of its maritime climate viticulture as opposed to Argentina’s desert climate viticulture. Also because Chile is so close to us, it is easy for them to come here on a regular basis and learn about our progress and developments in this wine variety.

Artisan Malbec: Do you think Malbec has reached its maximum potential, either in Argentina or worldwide?

Fabricio Portelli: Up until now it was all about the variety of the grape, but now the first ‘terroir wines’ from Malbec have started to appear. With time these will undoubtedly give Malbec a finer, long-lived wholeness, which will then be compared against the best wines in the world. Having said that Malbec has already proved another dimension when combined with other wines like Cabernet Sauvignon, Cabernet Franc and Petit Verdot.

“Consumers always associate Malbec with Argentina and what characterises us like tango, soccer, beautiful landscapes and our meat. Malbec reflects all of what Argentina is made of”

Joaquín Hidalgo (36) hails from Mendoza, where he received his title of winemaker from the Liceo Agrícola. He graduated as a journalist from the National University of La Plata, and since 2003 has been living in Buenos Aires where he writes about wine and food in major national media: wine writer for JOY magazine and Planetajoy, he is a columnist for the Sunday edition of La Mañana de Neuquén and La Nación magazine (2014). He co-edited the Austral Spectator wine guide between 2011 & 2013, the year in which he launched Vinómanos, the first mobile app guide to Argentine wines. He sharpens his creative wit in his blog, Bien Jugoso (planetajoy.com/bienjugoso). 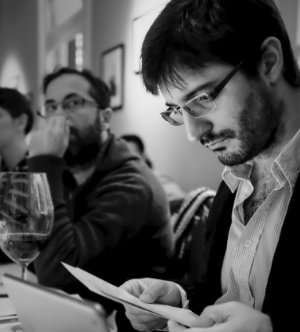